With October out of the way you would think the scary month would be gone. But no! I’m getting married in January and so even though with each passing month my excitement grows, so does my anxiety and stress levels. Most of this month was spent with wedding details but I still managed to cram in hours of games and a few films. So, let’s begin with the games!

After months and months, possibly even a year of on and off sessions, I’ve completed Divinity: Original Sin on PS4. I’ll probably do a review at some point so I won’t get too much in depth here. I’ve just started the sequel too so I’m excited to see how it compares. One thing I will say though. I don’t recall playing a game that actually implemented different skill and class aspects as well as this. What I mean by that is, you get quests and you get class specific skills and spells. A lot of the time, the quests are designed so openly that there is a wide range of ways to complete your task. To a fault possibly! A lot of the time I would be doing a quest and I’ll teleport a thing to a place which would then let me progress in the quest. But I would later find a lever or get a key of a dying character that would have opened up the same progression as my teleport trick. Occasionally I would straight up think I broke the game or that I’ve completely gone off the quest path but sure enough I would end up completing the quest by sheer bumbling. The game is a parent on their phone at the park! It gives you the tools such as a bucket and spade and tells you to go and play. Now and again it’ll look up and say you should try doing this or that but for the most part what you achieve with what you’ve got is all depending on your imagination. It’s an interesting game and I’ll do a review in the future if you’re after more details.

Another game that I’ve had for ages and been on and off with is Enter The Gungeon. The past few days I’ve given it a proper go. I’ve been craving a rogue-lite game lately similar to The Binding Of Isaac and this fits the bill. For those that don’t know what the gameplay is like, it’s essentially a dungeon crawler with bullet hell mechanics. You kill enemies, get currency, find upgrades, kill the floor boss and progress to the next level. It’s randomised each time and certain progression carries over to the following runs. What I love about the game is it fully embraces the gun aesthetic! There are tons of guns to use each with wacky functions or homages to guns of different medias. The enemies are all gun themed, these include walking bullets with guns that fire bullets, bosses like the Gorgun which is essentially Medusa with Uzi’s. Even the loading screen is a revolver loading animation. The game is pretty challenging too! You really need to explore and gather new weapons otherwise the later floors are going to be a real challenge. There’s a huge game here but I love the fact that the game is simple to play though. It doesn’t tell you much about the Gungeon itself, you have to wade through that and find its secrets on your own but the controls are very basic. It’s a simple to pick up but hard to master game and it’s perfect for those quick play sessions that we all need sometimes.

I have to stop buying this game. We all have one. The games we keep buying on different systems. And Shadow Of The Colossus is one of those games for me. So far I’ve bought this on PS2, PS3 and PS4. And each time I fall in love with it again. This is one of my all time favourite games. The whole thing is a giant experience. The scale, the awe, the amazing and perfect soundtrack. Shadow of the Colossus is essentially a bunch of boss battles but each one is distinctive and memorable. Even the weakest colossi I remember more than most final boss fights in other games. I can’t praise the game enough. I think it’s unique, I love the near barren world and the little details you’re left to figure out yourself. The fact that each boss is basically a puzzle you have to solve and as you progress through the puzzle the music changes along with you. Just a masterclass in gaming in my opinion. I can’t wait to buy it again! And again! And again!

I haven’t finished any series in November but I’m still going to mention a few of them. Especially this one since it has 9 seasons and I’m just flitting in and out of it so I’ve no idea when I’ll finish it but The Office (US). My partner loves this show and I’ve not really been that bothered to watch it. I think because I found the UK version really cringey. I know that was the point but I wanted to gouge my eyes out while watching it. So I was pleasantly surprised to see the US version is more comedy than awkwardness. It’s a great show to watch if you want something light while having your tea or in the background. Sometimes, that’s all you need.

A strange one I’m currently watching is Barry starring Bill Hader. I’m only 3 episodes in but so far I’m really enjoying it. It has that Dexter show dark humour about it which I’m a sucker for. Barry follows Barry who is a hit man that gets wrapped up in a job in Los Angeles. Circumstances happen which means Barry has to hang around the area which may not be a bad thing for him. During his hit he has to blend in with a local acting group and suddenly Barry feels something he wasn’t expecting. Has Barry found his true meaning in life on the stage? Again, if you liked Dexter I think you’ll like this. It has similar beats.  Barry lacks a lot of emotions but is an expert at killing. He has a code and believes in killing people who deserve it. And he has to have a fake face which he finds very difficult to achieve. The show has a good grasp on when to be dark and when to be funny. Make no mistake, there is quite a lot of grim violence but it all adds layers to Barry and why he is the way he is. So far, it’s a very interesting show and I’m definitely going to finish it. It also features Henry Winkler AKA one of the best character from Arrested Development so that might twist your arm. 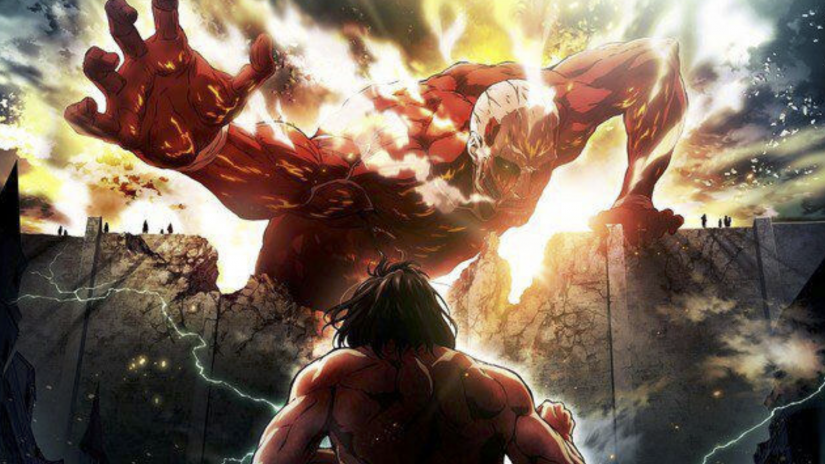 I’m way behind but I’m closing the gap fast on Attack On Titan. I watched the first season when it came out years ago and I’ve just finished season 2 this week. It’s still a great anime. Got a bit slow at parts and a few characters got a bit too much screen time for my liking as I didn’t really care for their characters but I understand that it was building to something and I completely get it now. The Titans will never not disturb me and even though I got fewer answers than I would have liked, especially how the first season ended, I still appreciate that the plot has progressed and new revelations have come about. There are so many questions raised in this season alone though but I’m eager to watch season 3 and eventually find out some answers. Season 2: Highly Recommend 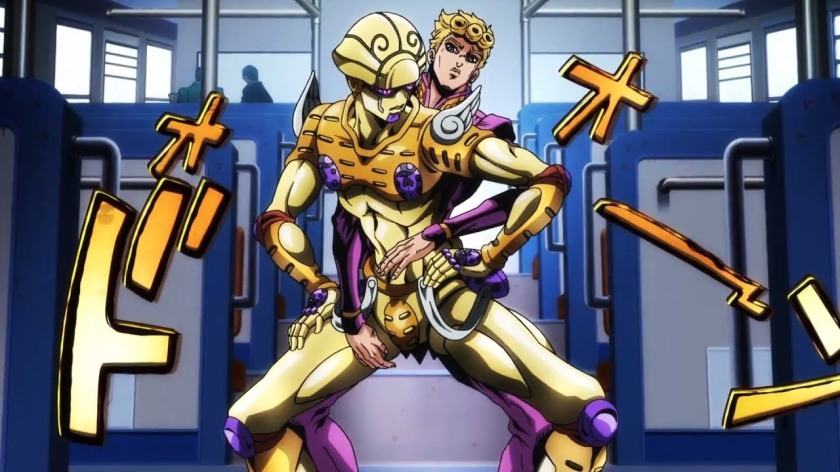 One of my favourite animes is back, Jojo’s Bizarre Adventure, Part 5: Golden Wind! I’ve been eagerly awaiting this since I finished part 4. I needed my Jojo fix and actually read all the parts in their coloured manga form. So even though I’ve read this entire part, I’m still super excited to watch each episode and to see some of my favourite bits come to life on the screen. And come to life it does, it looks fantastic! So bright and colourful! You’ve got to love the Gang Stars too. All the crew are great and their voices perfectly match what they sounded like in my head. Some people put Golden Wind down and I can understand a lot of their complaints. I’m excited for Golden Wind mainly because it gets me closer to the later parts being released in anime form but that’s not to say part 5 is bad. I personally find the main character and his Stand power to be pretty bland in comparison to the other main characters and powers of other parts. Still, part 5 has some of the best Stand battles, the wackiest Stand abilities and I honestly do love the team. Narancia is a highlight for me and I can’t wait to see some of the future fights. Golden Wind: I’ll always recommend Jojo!

I’ve been following these guys on Youtube for…..I don’t even want to know how long I’ve wasted my time on these scrubs but the Super Best Friends Play are my favourite Youtuber’s and streamers. Matt, Pat, Woolie and the previous member Liam have some of the best gaming content out there. They love their games and if you ever check out their videos where they play series they love or anything with mechas fighting, you can tell how hype they get. They also host a podcast each week which I really recommend checking out. One thing I will say if you try them out, is if you don’t like them straightaway, try to stick them out a bit. The Super Best Friends don’t make it easy on their channel and I love and hate that aspect. There is a lot of inside jokes and references, stuff that I’d get after years of watching them but to newcomers it is just ramblings. Nevertheless though, if you just want a channel that will play through a game and will give their honest opinion of it, they’re perfect. They don’t ham fist it, they don’t scream at the top of their lungs, they don’t shill their content and they very rarely use cameras. It’s just a pure gaming channel. If you interested in trying one of their playthrough’s I highly recommend Beyond: Two Souls or Omikron. They have a massive hate for David Cage games, besides Detroit Being Human. Mostly because they see the potential in his games but they love when the story goes down the toilet or when his twists don’t make sense. It’s a great laugh.  If you’re a lover of fighting games, I also highly recommend their channel. Each Friday night they play a fighting game, both great or terrible games. I also recommend their Subreddit if you  are willing to try them. You will hardly find a better community and fanbase than the TwoBestFriendsPlay Subreddit.

Thank you for reading this post and feel free to comment your views or suggestions for me to try.