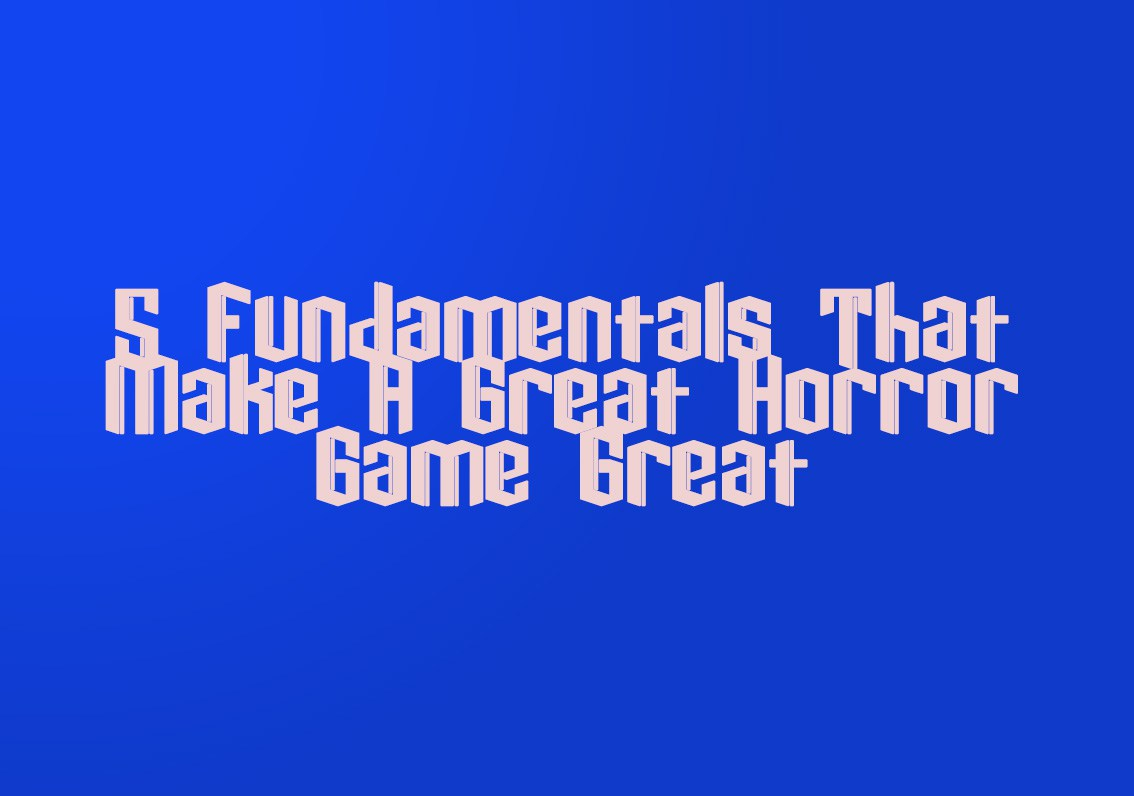 Frights are like a curry. Some people like a korma, nice and mild or a balti with a bit of a kick. Others prefer their horrors stronger like a vindaloo, both though still require a change of underwear. We all have limits though when it comes to them. Today I want to look at key components of horrors, the spices if you want to keep with the curry analogy. While all these components may not always be featured in every horror, when used well they can be good enough on their own.

What goes bang bang bang in the night? My neighbours! Not the fun kind even, I mean stomping round like T-rex’s trying to squish a flea. Sound is among one of the strongest senses. If someone tries to describe a smell to you, a flavour or even a texture, it’s not an easy thing to replicate in your mind. We are more visual and sound based when it comes to imagination. It’s easier to associate that with a previous noise or image we’ve seen.

When it comes to imagination and horror games like to feed off of that talent of ours. Imagination is our own worst enemy at times and to be quite frank I thought of giving it its own space on this list but it factors into so much of horror games that it needs to be broken down with these choices I’ve made.

Sounds in games don’t have to do much. We do the rest. *Tink*, as something hits the floor in a game, I stand completely still and stare into that vicinity for minutes until I’m brave enough to move the character closer. What is there is a pesky rat, what I imagined, was 3 shark toothed goblins riding spiders. And I don’t mean 3 spiders, I mean a swarm of millions of arachnids lifting the goblins up with their long, black legs. Feeling itchy yet? Thank your imagination for that.

Now with sound and imagination, comes the dread. A typical horror will have sprawling levels with lots of nooks and crannies. More than likely the game will be dimly lit and lighting used effectively to bring the shadows out to play. That’s when the dread will set in.

This usually occurs happens pretty quickly in horror games. It doesn’t give you time to relax, especially in the beginning. At the start everything is new to you, you don’t have a lot of weapons or a weapon at all. The beasts or dangers lurking ahead may not be revealed yet and so whatever your mind concocts will be primed to your personal fears.

The start of the game is usually bombastic in the beginning. Something needs to set the pace and similar to books, games need to make a good first impression. The dread you feel imbues you with curiosity. You want to play the game and dread is similar to ripping off a plaster (band-aid), get it over with and hope for the best. But, a game done well will then lead to……

A horror game needs to retain its scare factor. Otherwise it isn’t a horror game any more. The original Bioshock had that issue for me. The first couple of hours I was a twitchy mess. After a certain point though and once I had more guns than the army I wasn’t phased any more.

It’s not necessarily a bad thing as Bioshock is a great FPS as well as a horror but a full horror needs to build on what it starts. From start to finish the player needs to nearly always be on edge. Having lulls is a good tactic though when used well, it doesn’t need to be 150mph every second. A haven is also a great time to do a cheap scare. Like Dead Space (2?) having a save spot with a surprise Necromorph. Cheap but memorable.

Resident Evil does a fantastic job of this with the safe rooms. That calming music, the opportunity to save and the brightly lit room give a chance of respite. Every player gives a sigh of relief when they find a new safe room. They can calm down for a bit but then they have to go back out into the mansion. That’s the build up aspect again, because if you’ve found a new safe room, that means you haven’t seen what is to come. The new horrors around the corner, which…..

…….are waiting in the shadows for you. Monster designs are crucial. If a monster isn’t scary, it’s not a monster. There don’t need to be thousands of monsters or monster designs in your game. One truly terrifying beast can carry it.

What makes a good monster? The unknown or something so mundane that when it’s different it’s unnerving. Resident Evil Remake does a great job of this is my mind. Zombies on their own are a classic horror enemy. Slow, lumbering and resilient. That aspect of them is scary but the fact that they can infect a person so easily is where I think their terror stems from. Similar to how Dracula was an analogy to STI’s, zombies represent a sickness. Nobody wants to get sick. It’s practically universal among all life and so everyone fears that aspect of zombies.

But zombies are a tried and tested monster which some may be a bit bored with, that’s where the Crimson Heads come into play. We became so use to the zombies of Resident Evil that when a variation is thrown in, it scares the bejesus out of us. Me especially. It’s a classic monster taken to a new level. Slow is now fast, easy to dodge is now horrifying to run from.  That shake-up keeps things fresh and taps into a particular fear. We all fear something. Monsters are just things that take advantage of those fears.

It’s obvious really. Be it a diary entry detailing a man’s personal transformation into a brain dead zombie or a mechanical bear lunging at the screen. A horror game needs to be full of scares. They can be subtle and intended to get under your skin, or a full on jump scare.

While some may call jump scares cheap and I will admit the Five Night’s At Freddie’s series isn’t really my thing, they still get me good. They’re effective but not long lasting in my opinion. Resident Evil has very few jump scares and is remembered as one of the best horror series. Again, that is the dread and build-up in big effect.

But everyone who played the original RE remembers the dogs jumping through the window or the time in Resident Evil 2 where there is a zombie in the door transition screen. The entire game before it didn’t have that and so everyone assumed the door transition was a sanctuary. Wrong! Heart attack city that was. So jump scares are just as good but a balance is the perfect recipe.

You need the calm before the storm to truly appreciate the savagery of the storm.  But anyway I hope you enjoyed my thoughts and feel free to let me know yours in the comments. Did a particular monster scare you or what scares you the most in games? Halloween season is upon us, let’s get scared together.