Currently I’m playing the JRPG, Ni No Kuni 2 and even though I’m enjoying it, I’m getting very annoyed with its text. It sounds absurd to be that frustrated by text but when it takes away from my experience, there is an issue. I don’t like to give games a point based review on my blog. But if I were to give Ni No Kuni 2 a number out of 10, I’d probably deduct 0.5 from its final score just because of the text. It’s that bad! Here’s an example for you kind reader: 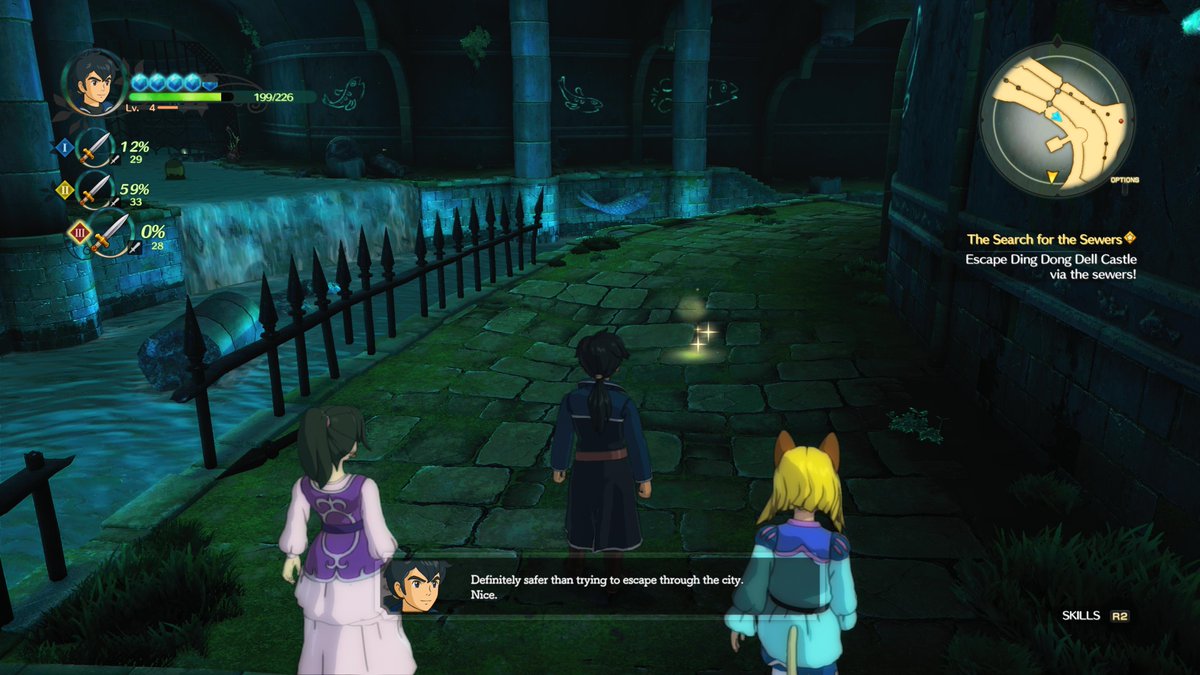 What is that?! Even on my 40 inch TV I struggle to read it. My vision as far as I’m aware is 20/20. I’ve never had any issues with reading things at a distance but with this game I really struggle. You have all that lovely space to use up on screen, whoever made this choice. I understand that you don’t want to clutter the screen because the game looks amazing but I want to read what characters say. I wouldn’t mind so much if each bit of dialogue is voiced but it isn’t. These dialogue boxes aren’t voiced in the dungeons. Not only that but they are frequent. So far they aren’t necessary for the game but they provide nice character interactions and help to fill out the personalities of these people. I want to learn this stuff, I shouldn’t be torn between focusing on where I’m going and reading banter. This is especially annoying if in the middle of combat or trying to do a stealth section. Which brings me to my next point and problem. Here is a GIF from the first stealth section of the game:

I apologise for the blurry text. First time creating one so I might be able to find a clearer source in the future. But! You don’t need to be able to read that text. I just want you to see the problem. The text prompts require super fast reading skills. I haven’t sped that up or slowed it down, that is the default speed. Now as you can imagine, at this point you are trying not to get noticed so you are extra vigilant. A text pop up happens and obviously you want to read it because it could be important and or informative. Your attention is needed to avoid the guards so you do the classic move. Eyes up, eyes down, eyes up, eyes down. You get snippets of text and then check your movements are on point and then back down for more text. On your 3rd attempt at this however, the text disappears. Information is lost forever. I shouldn’t have to be The Flash of reading! It’s a JRPG! These games are notorious for their game length. It’s not like they’re rushed for time so how about extending that to the dialogue boxes.

90% of these won’t be important, I’m aware of that. I should have the ability to experience it thought if I want to. What the characters are talking about though is key to creating this universe it’s set in. It could be Roland’s thoughts on this new world that he finds himself in. That connection between him and me experiencing this world for the first time is vital in my opinion. He is my eyes and voice. Young Evan has just lost his father recently in the game’s timeline. He could be scared of this adventure he is setting out on but longs to be a strong leader like his father. I may miss that dialogue because of the fast and small text if he says it whilst in a dungeon. It doesn’t matter what he is saying, it could be his favourite Monster Munch flavour for all I care! The point is, those words, no matter what they are, flesh out this world and it’s inhabitants. To really delve into the universe, filler text is important. Bioshock got it right with its audio logs. You don’t need to read the subtitles as you have the audio but at least you have the choice. Rapture’s past is brought to life by those recordings. It’s just a shame that something so easy to fix in games, tends to be ignored or unnoticed. An option to change text size shouldn’t be difficult to implement. I’ve not even mentioned people whose sight is worse than mine. Everyone is different and the more options we have in games for different people, the better.

Hopefully you enjoyed my whinge and let me know if you’ve experienced similar to this. Side question, what’s your favourite Monster Munch flavour? I’m a beef guy myself. Cheers for reading!

6 thoughts on “A Game Sin That Needs To Die: Small Text”